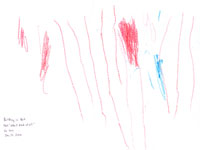 Last week’s earthquake in Haiti has prompted an out-pouring of response, including donations, humanitarian trips and all manner of charity and fund-raising projects. Our own head monkey, Kevin D. Hendricks, has enlisted the help of his 4-year-old daughter Lexi and launched Color4aCause.
Lexi draws pictures to encourage visitors to donate to Haiti relief efforts. Make a donation, get a picture. It’s that simple. In the first week $635 has been raised. So far Lexi has drawn 26 pictures.
The money raised is going to the relief efforts of Kevin’s church, Messiah Episcopal Church in St. Paul, Minn., which has a 20-year partnership with organizations in Haiti.
In addition to making a donation and getting a picture, the site also invites other children to color for a cause and submit their own pictures.
Kevin admitted it’s a crazy idea on his personal blog, noting how quickly the idea came together. He formulated the idea on Friday, recruited designer and coder Ben Jordan to design and build the site and it went live Sunday night.
The site also has a Twitter feed and Facebook group to keep fans updated. Color4aCause has been featured by We Life Simply and Halogen TV.