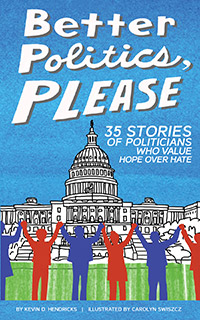 West St. Paul, Minn., Sept. 24, 2020​ – As we approach the 2020 presidential election, people yearn for a politics that’s less divisive. ​Better Politics, Please: 35 Stories of Politicians Who Value Hope Over Hate​ is a collection of encouraging stories of common ground. It’s about finding a more productive and civil form of public discourse.

“People will always disagree, but what if we could find something to celebrate in each person, no matter their party?”​ asks author Kevin D. Hendricks. “Instead of trying to pick a fight, let’s try to start a conversation.”

The book, launched with the help of nearly 120 backers on Kickstarter, offers short profiles of politicians from both sides of the aisle and from local, state, and federal government. Each profile draws from a wealth of secondary sources to give an in-depth look at bipartisanship. It’s also illustrated, featuring quirky drawings of nine politicians by artist Carolyn Swiszcz.

There are familiar names, such as Senator Tammy Duckworth and Rep. Dan Crenshaw, as well as local politicians you likely haven’t heard of, such as Republican-turned-Democrat Beth Fukumoto and nonpartisan Reno Mayor Hillary Schieve.

Here are a few quotes from the featured politicians:

Better Politics, Please​ is now available in print​ and ​digital​ versions. Visit ​BetterPoliticsPlease.com​ for more details. Kevin D. Hendricks is a freelance writer and editor who has published a dozen books.